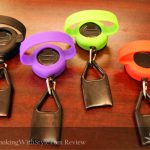 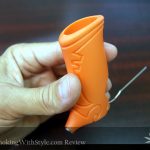 You probably have a lighter or two that you didn’t pay for. In fact, you may have half a dozen lighters that you’ve stolen from friends. There’s nothing wrong with this act of theft, provided you follow a couple of simple rules:

1) Don’t take a lighter that was not handed to you.

2) If the person asks you for it, give it back.

3) If it’s an expensive, unique, or meaningful lighter, don’t take it.

During a session, it’s critical to use a lighter that lacks a child-safety device. If you don’t own a lighter without a safety device, be sure to de-childproof the lighter you have. Most stoners are strict on this rule, because it makes even the most stylish smokers look foolish, when they can’t figure out the safety mechanism. (In most cases, de-childproofing a lighter is simply a matter of breaking a small piece of plastic off the back.)

As pictured above, there are some pretty cool products out there to help you to keep your lighter from getting lost or to add functionality. While they are not absolutely necessary to smoke with style, they are pretty darn cool!

Car lighters are practical only for igniting joints or “hemp wicks” (as described below.)

One of the newer products on the market (used to “spark” up your smoke) is the hemp wick. Once lit, the thin hemp cord is fueled by beeswax which keeps it burning for the full length of your session. By using this product, you guarantee that you will never have to inhale butane from a lighter or sulfur from a match. Instead, the idea is to taste only your quality buds by producing a continuous organic flame made with hemp and beeswax.

Since hemp wicks are relatively new to the scene, I have included simple instructions below:

1) Light one end then tilt it up or down to control burn speed.

2) Do not leave wick burning unattended.

3) Wick must be completely put out after each use.

Caution: Beeswax may drip from the wick.

Zippos are quality lighters, but shouldn’t be used to light pipes or bongs, as the fuel tastes bad. An exception to this rule can be made under windy conditions as the Zippo’s flame may stand up to high winds better than the flame from a conventional lighter. In most cases, however, butane lighters are the better choice.

For sparking pipes and bongs, matches don’t work as well as lighters. Matches contain sulfur, which can ruin the taste of your bud. If matches are your only option, make sure to let each one burn a few seconds before lighting the bowl. This should allow enough time for the sulfur in the match head to burn off. Also, once lit, try to keep the bowl “cherried” (burning) to minimize the number of matches used during your session.

As well as lighting your weed, your lighter can be used to “snuff” your bowl. After taking a hit from your pipe or bong, place your lighter horizontally across the utensil’s bowl to put out the cherry (“snuff” the fire) and keep your weed from burning needlessly. The best lighters for this purpose are rectangular in shape rather than cylindrical. However, rectangular lighters are often of poor quality.

One way to avoid the loss of a lighter is to pass the lighter and the bowl simultaneously. If the lighter and the pipe are passed at the same time (and in the same hand), you may be able to prevent some wannabe lighter stealers from making off with your precious flame. This tip works especially well for pipes and should be used only with caution while smoking from a water pipe or joint.