WHAT ARE CANNABIS CONCENTRATES? 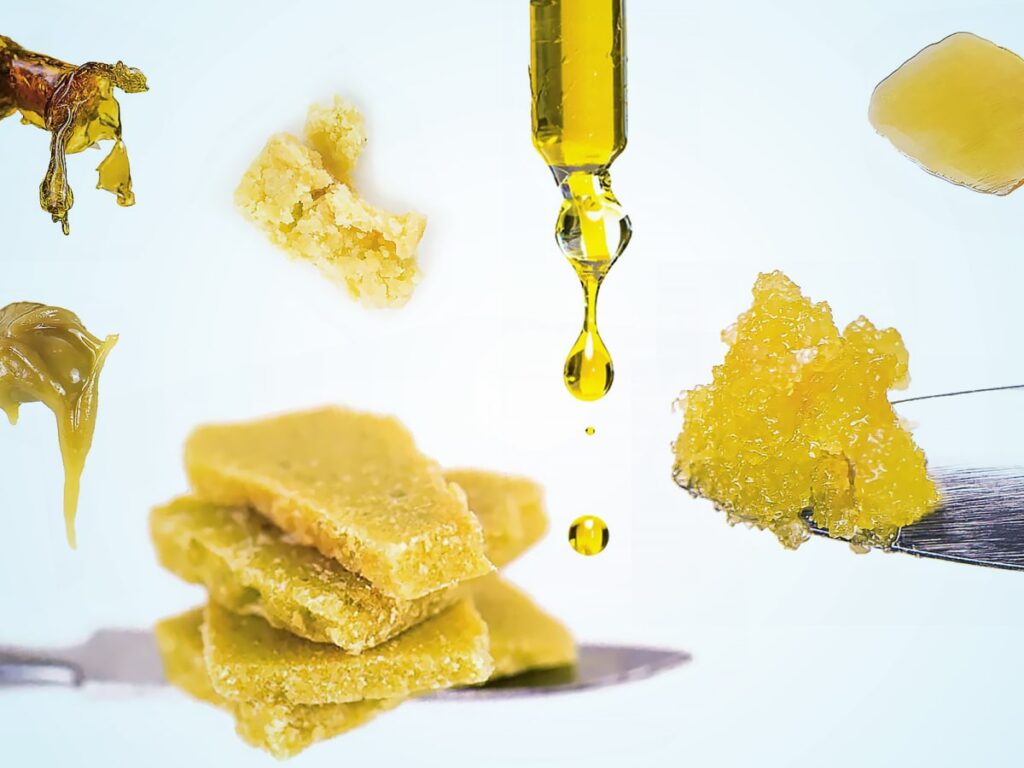 Cannabis concentrates are becoming increasingly popular. Rather than the typical flower (bud) form of marijuana, these concentrates come in a huge variety of styles and generally have a waxy/oily appearance and texture. These concentrated forms of marijuana go by different names like “wax,” “BHO”, and even “oil,” but they all fall under the “concentrates” category.

Using solvents like butane, CO2, or ethanol, manufacturers strip specific compounds from the plant through an extraction process. This leaves behind a final product with THC or CBD levels as high as 80%+. Concentrates are used for medicinal purposes, for elevated smoking experiences. They are put into marijuana edibles, sprays and lotions.

The following list of cannabis concentrates will cover the basics of what can be found in dispensaries today.

BHO is a very potent concentrate generally associated with “dabbing” and various other vaporization methods. While it has been around for quite some time, BHO has only recently began to gain public awareness.

The process by which BHO is created has become extremely controversial, causing the government to call it “the crack of marijuana.” The main concern is that BHO is made using butane.For instance, there have been reports of apartments and houses catching fire due to unknowledgeable people attempting to make it.  Fortunately, there are more and more medical-grade labs being established specifically for extraction purposes.

Butane hash oil can come in different forms depending on how it’s made. Below is a short list of the many types you may find at your local dispensary.

As suggested by it’s name, wax is a concentrate with the texture and appearance of, you guessed it, wax. Generally yellowish/brown in color, a “dab” of wax can be smoked using a water pipe or vaporizer.

A slab of shatter is generally yellowish or clear in color and has a look similar to a slice of Swiss Cheese. To use, simply snap a little bit off then use it on your oil rig or in your wax vaporizer pen. (Typically, enthusiasts believe this to be the most potent form of hash oil… or any form of marijuana concentrates for that matter.)

Crumble, budder or honeycomb wax is the next form of BHO you may have heard of. It is created by vacuuming or whipping the BHO during the creation process making the wax a bit softer. However, it remains brittle to the point where it can crumble in your hand… thus the name “crumble.” When using a vaporizer pen, like the glass globe vaporizer, crumble the product to mold to the coil as this will allow direct heat onto the wax.

Another form of marijuana concentrates is hash (or hashish as it’s called in the Middle East). Simply put, hashish is the resin of the marijuana plant collected and compressed together. This creates a light or dark brown product which is very sticky. Hash can be rolled into a ball to be smoked or vaporized.

A common misconception is that hash and wax use the same kinds of vaporizers because they are both concentrates. However, hash is better smoked using a dry herb vaporizer because the coil covers more surface area.

CO2 extraction or Supercritical Fluid Extraction (SFE) is considered one of the most effective ways to extract THC and/or CBD from cannabis. The benefit of using Carbon Dioxide as opposed to butane is that CO2 doesn’t leave a residue. The purity of the end product is the main reason that CO2 extraction is gaining such popularity. This method of extraction, produces an amber-colored oil which can be vaporized in a number of ways. For instance, CO2 oil is generally what you find in disposable vaporizers.

Tinctures are essentially alcohol extractions of the whole cannabis plants (generally the flowers and leaves). They are easy to make, relatively inexpensive to produce, and are a great alternative to smoking or vaporizing. Use tincture sublingually (under the tongue). They are often flavored for better taste and are generally stored in dark bottles in the refrigerator section of your local dispensary.

Rick Simpson Oil is a cannabis concentrate said to have cancer-curing properties. It is made using Isopropyl alcohol, grain alcohol, or other solvents such as pure light aliphatic naphtha. When extracted, Rick Simpson Oil ends up as a thick dark brown gel which is generally dispensed through a needleless syringe. RSO can be ingested or applied topically. Both applications are being researched for their curative properties and more information can be found on the Phoenix Tears website.

Separating cannabis trichomes from the plant matter creates kief. The process of rubbing cannabis material (flowers, trimmings and leaves) back and forth across a fine screen creates the actual kief.

BUD SAYS: During this most important era marked by marijuana legalization progress, I suggest we smoke concentrates with caution as people on the outside can too easily draw similarities to the smoking methods of both meth and crack cocaine.