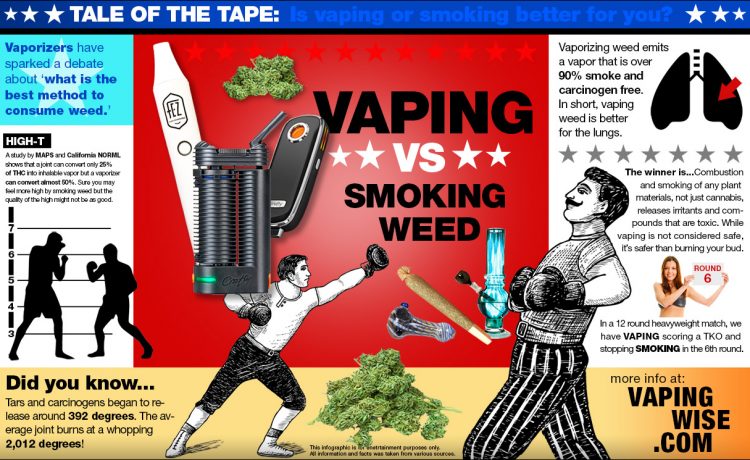 This article first appeared on Vapingwise.com.

Have you ever wondered which technique is better: vaping vs smoking weed? Is vaping weed really healthier than smoking the herb? Or is smoking weed and vaping basically the same thing?

The recent vaping revolution has even some of the ‘old school’ smokers trying something new. but before you can choose whether to vape or smoke, consider all the angles of the situation. Their are advantages to both methods of intaking weed. For example, vaping weed releases more concentrated THC. Smoking weed offers a stronger high.

DIFFERENCES BETWEEN VAPING VS. SMOKING WEED

Before dissecting vaping vs smoking weed and discussing the benefits of each, you need to understand how each process works.

When you smoke weed, you apply flame to the bud. This flame burns the bud (or flower) and causes combustion. It is the combustion that allows the release of THC and various other cannabinoids. The problem with combustion is that it releases toxins, carcinogens, tars, and particulates which can be considered harmful.

Any dried plant material that undergoes the combustion process releases these chemicals. When you burn weed, tobacco, or other plants, the heat destroys chemical bonds. These bonds hold together the organic molecules of the plant and carbon atoms. After the molecules break down, reactive fragments remain. These fragments are free radicals, which bond to themselves and other molecules- forming byproducts.

The problem with the combustion process led to the development of vaporization. It was a means to solve the byproduct problem stemming from traditional marijuana smoking. The idea of vaporizing allows you to ingest the THC, without the release of dangerous chemicals. Unlike combustion, vaping weed heats your bud only to its boiling point. This causes dehydration of your bud. The dehydration process releases THC without the chemicals of combustion.

Marijuana itself does not cause lung cancer. Some studies even claim that it has the potential to prevent it. That is because it is the combustion, not the marijuana that is dangerous. Combustion causes byproducts that can cause throat irritation, or even chronic bronchitis.

When you vape, 95% of the vapor released is cannabinoids, leaving only 5% that could be harmful. Smoking, in contrast, contains only 12% cannabinoids. This is a huge difference. Vaporizing weed is not only less carcinogenic, it also feels better. Have you ever thought about how your lungs felt after smoking vs vaping weed?

When you consider the figures, vaporizing being healthier just makes sense.

When you look at the numbers, you can see that you are inhaling a lot more byproducts during combustion. Smoking a joint is a lot less healthy than vaporizing your weed at a lower heat.

Vaping vs smoking weed verdict in regards to health? The verdict is…

WHICH IS MORE EFFECTIVE?

You have to consider several things to determine effectiveness. First, how efficient is the method when it comes to releasing THC? Second, what quality is high that results? And third, what is your level of functioning after vaping vs smoking weed?

We have already discussed the figures about the purity of vapor vs smoking weed – but how much THC is in each method? A study by MAPS and California NORML answered that question. A joint can only convert 25% of the THC in bud into inhalable vapor, but a vaporizer can convert 46%. That is twice as much! So, not only does vapor have less chemicals than smoke, it has more THC. This is great because you can actually smoke less weed and have more of an effect when you vape.

The high from smoking also comes on stronger and is more intense than a vapor high. This is good news for your high, but bad news for your body. This more intense high is a result of the extra chemicals released during combustion. A smoking high also often ends in munchies and a feeling of relaxation. Unfortunately, you may feel lethargic or lazy.

A vaporizing high has minimal effects on the body. This is beneficial if you like to smoke and then do things, instead of sitting on the couch. The high from vaporizing also does not last as long. The fact that you smoke less when vaporizing offsets this because you can have more sessions.

Vaping vs smoking weed verdict in regards to effectiveness? The verdict is…

WHICH IS MORE CONVENIENT?

Vaporizing can be considered more convenient than smoking because it is far more discreet. Some traditional tools (like one-hitters, bowls, and joints) are easy to hide. Vape pens are easy to hide as well, because they look like an e-cigarette. Vaporizing wins this category because of its other discreet benefits. It produces smaller coughing fits, less of a smell, and smaller smoke clouds. These factors make vaping the better way to enjoy your weed in public (where it is legal, of course).

At the same time, you may consider smoking more convenient because it’s something you’re used to. But, just because you are “used to something,” does that make it more conevient?

Let’s face it, if you have never vaporized before, it can seem a little intimidating at first. But, once you try it, you may consider it even less of a hassle than smoking.

Vaping vs smoking weed verdict in regards to conveniency: The verdict is…

After comparing the two: vaping vs smoking weed, we have concluded that vaporizing is the better smoking option hands down. It is better for your lungs, more convenient, and more efficient.

While vaping wins, traditional smoking methods are not without their benefits. You don’t have to choose one or the other. You can switch between the two if you want. Remember though, whether you are smoking or vaping, be responsible! 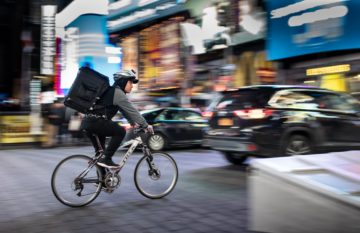 Here’s How You Can Get Easy Marijuana Delivery

Smoking Marijuana
Wednesday, June 9th, 2021
Marijuana is becoming legal in many countries all over the globe in the past few years. About half of the US states have legalized it for medical and recreational use, so stores are popping up literally behind every corner. However, today, you can buy your stash without leaving the comfort of your chair, and the store will gladly deliver your order directly to your doorstep. 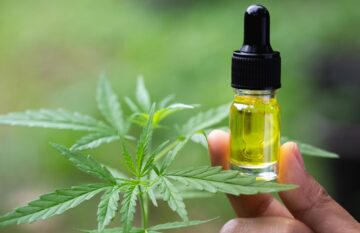 How CBD can help you with the common cold

CBD
Thursday, June 3rd, 2021
Common colds are one of the most common viral illnesses around the world. This is due to the ease with which these viruses can spread among people. Although they are not serious illnesses, the common colds they give us are somewhat annoying, since we must keep us with some snot wipes, anti-influenza, and even other things to fight the flu.
View all posts